Who else squealed a little bit when they heard about the Royal Engagement?! We are so excited for Meghan Markle and Prince Harry and cannot wait for the Royal Wedding coming this May. Thinking they may need some foldable ballet flats to hand out to their guests, don’t you think? Grabbing our Cinderollies and sending them off to the new, happy couple in hopes they will give them out as wedding favors as well.

See the story behind the happy couple from The Knot News below. TORONTO, ON – SEPTEMBER 25: Meghan Markle and Prince Harry attend the Wheelchair Tennis on day 3 of the Invictus Games Toronto 2017 at Nathan Philips Square on September 25, 2017 in Toronto, Canada. The Games use the power of sport to inspire recovery, support rehabilitation and generate a wider understanding and respect for the Armed Forces. (Photo by Karwai Tang/WireImage)

“His Royal Highness and Ms. Markle became engaged in London earlier this month,” Clarence House shared in its statement. “Prince Harry has informed Her Majesty The Queen and other close members of his family. Prince Harry has also sought and received the blessing of Ms. Markle’s parents.”

Clarence House also confirmed that the couple’s wedding will happen in Spring 2018, nearly seven years after Harry’s big brother Prince William wed Kate Middleton in the spectacle of the century. “The couple will live in Nottingham Cottage at Kensington Palace,” the statement read.

The royal, 33, and the Suits actress, 36, first quietly started dating back in July 2016, and their relationship was confirmed in October 2016.

Prince Harry and Meghan’s engagement comes after Queen Elizabeth II and Prince Philip recently celebrated their 70th wedding anniversary. Prior to that, Markle was spotted at the palace for tea with the Queen while engagement speculation reached a fever pitch. The actress was also spotted moving out of her home just last week ahead of the announcement.

Markle and Harry made their first official appearance together at his cause, the Invictus Games, in Toronto this fall. “I can tell you that at the end of the day I think it’s really simple,” Markle told Vanity Fair of her relationship. “We’re two people who are really happy and in love.”

“We were very quietly dating for six months before it became news, and I was working during that whole time,” she continued. “And the only thing that changed was people’s perception. Nothing about me changed. I’m still the same person that I am, and I’ve never defined myself by my relationship.” 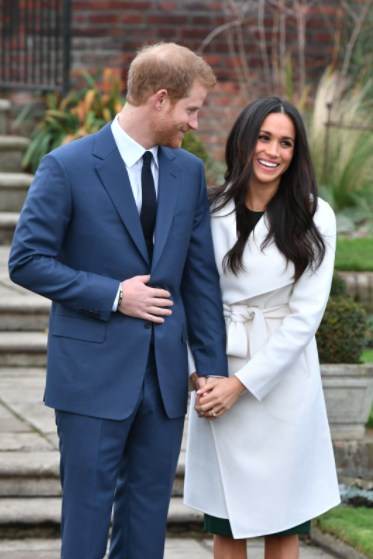 Prince Harry and Meghan Markle in the Sunken Garden at Kensington Palace, London, after the announcement of their engagement. (Photo by Dominic Lipinski/PA Images via Getty Images)